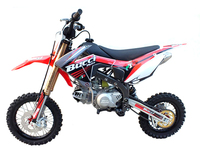 Bucci pit bike brand is manufactured from an Italian artisan named Claudio Bucci. With his wife, Chiara, they have a true passion to win the races.

When the first mini dirt bike races was organized in truly Championship in Europe, their motorcycles became the reference for performance. Ride during several years by the famous frenchy Mike Valade and now Kevin Llamas and Gauthier Gourjault the pit bike Bucci flies over the races everywhere in the world.

UPower is wholesaler for the dirt bike Bucci for France, United Kingdom, Spain and Portugual.

Bucci win the french champion ship 2014 in the 2 main class !

Click here to see all the reviews of dirt‑bike‑store.com

We use cookies on our site to collect statistics on visits. By clicking on I accept or by continuing on this site you accept the use of these cookies. More infos...
COVID-19: Orders are still being processed and shipped
A Question ?