How to boost your engine 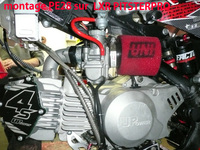 What works, and why on our pit bike !

A little history to understand that all engines do not always require the same type of modification:
Pit Bike engines were originally designed (2005) for the torque that is the power at low revs. This facilitates the learning behavior thanks to engine very easy. Manufacturers used a camshaft which opens the valve over a low duration and the head port was small diameter.

The most common engine was the 125. One engine has supplanted all others for its qualities of robustness, the Lifan 125-1P54FMI. Used on all models of initiation he receives no modification. A bigger carb and a high compression head gasket suit him well.
The 138 and 140 Lifan, very used in 2007 can receive the same modification.

In June 2007, the engine manufacture YX hit hard by showin a stronger low engine with a copy of high engine Kawasaki KLX110. A big bore 60mm and a small stroke. Valve opening duration increased  25% gave him a furious behavior quite opposite to what was until then. He became a good investment to make him spit up 20hp with an exhaust head port work and increase the head pressure.

The Lifan 150 was released in 2008, it was the 140 engine bored to 150 on which the Chinese have used a camshaft too powerful to the point that the single valve spring does not always follow ! They tried in vain to copy the performance of the YX150. They update in 2009, lately.

Daytona 150 came with a powerful 2-valve cylinder head on an engine base standard. It quickly became a reference in terms of elasticity capability at low speed, power and longer. 18cv easy to use. Evolution of the performance by increasing the compression and to work on the head ports.

Zongshen is a heavyweight industry in China, they made in January 2008 a 95% copy from the YX 150, 155cm3 with differences in the teeth of the primary transmission gears and kick. An evolution marked by a removable clutch cover released in June 2010. Same recipe as the YX150.

New in end of 2008, the YX149/150-5 YCF/149 UPOWER, as Lifan, YX evolved theire 140 with the addition of a clutch cover with oil filter. But they used a better camshaft. 140 version with exactly the same engine as the top 149 can have the same engine kit based primarily on the optimization of compression with increased squish areas (minimum distance between cylinder head and piston). Also the Z40 camshaft give great gain.

YX 4 valves. The first to democratize this technology in 2008. The head copied from Kitaco can be used on the engine type  KLX (YX150/160, GPX160, Zongshen 155). The first work does not to increase performance but on the finish and settings. This head can take 12000rpm but the valves springs panic dice 11,000 ! The camshaft is badly stalled and the original marks are not good. There is no many technic guy able to make its right. UPower can do but only on full engine.

No new engine in 2009 but reliability of all the engines listed above. How to improve not change
Mini flywheel ignition copied on Daytona appear on Lifan and YX.
The YX is not adjustable  but works right with a CDI microprocessor.
This CDI was developed by UPower to reduce the risk of kick back and breakage induced crankcase. Starting is easier and the engine responds better in low rpm.
Clutches were improved in 2010 at the rubber damper to increase their lifespan.
Keihin PE28 UPower carburetor on 4 stroke is democratized in 2011 because it is easy to adjust and gives incredible power to your engine.

150 UPower 4 valves 2011, available as early as November 2010, this is a new generation of powerful and reliable engine. In 2012 a new ignition Red Devil has improved the ease of starting. An electric starter version was also available

End of 2011 come the Daytona Anima 4 valves, this engine suffers from reliability issue immediately. Crankcase and gear kick broken. (updated on 2013)
The engine was designed, optimized for a 190cm3 displacement. Version in which it is very strong, maybe a little too much for the strength of the crankcase and connecting rod.
For the 150cm3 they simply use a crankshaft with a shorter stroke. The result is a not easy to use engine that lose 25% power compared to the UPower 4S at half rpm.

The 88cc cubic become a hot business in UK and France since 2013. Every tuner try to do the best but finnaly only one win, UPower 88-2S. Since 2012 UPower works with ModernWorks that distributes replicas Takegawa. On 2014 Gauthier Gourjault win everywhere with the UPower 88-4S. Clutch and gear box reinforced are the secret to do engine reliable and strong. For 2014 the gear box are updated to reduce the risk of trouble on the third gear.

2014, end of this year appear the TOKAWA 150 and 160. There are made from a full new manufacture open with YX and ZongShen engineers. The produce the UPower 4S with some improvements for the gear box, the piston, the clutch, the oil filter.

UPower advice :
Working on the camshaft and compression we will have gains over the entire operating rpm.
To increase in compression can be made in different ways:
- Reducing the combustion chamber cubic
- Diminue the head cylinder high
- Reduction of the thickness of the head gasket
- Using a higher piston
- Diminue the cylinder high
Often the best solution is a combination of several of these points.

Note: engines 150, since early 2008, have valves durations +25%. This gives them a very high sensitivity to acoustic arrangements. Two different exhaust can give two engines behavior quite opposite. Sharp or torquey !

Items in the same category

How to adjust the carburetor

Analysis of forks that we know!

We use cookies on our site to collect statistics on visits. By clicking on I accept or by continuing on this site you accept the use of these cookies. More infos...
Confirm?
A Question ?