How to adjust the carburetor

A carburetor is to mix gasoline with air, more exactly to oxygen.
This proportion must vary in a small range. Not enough gas = engine lean. Too much = rich
- A light, lean engine run quickly and hight rpm but become quickly too hot which can cause knock at full load. An engine too lean will not speed up when you open wide the throttle, can backfire in the exhaust.
- A slightly rich engine delivers more power, better cooling the combustion chamber. Too rich the engine refuse during acceleration and does not take its maximum rpm.
Symptoms:
= too lean as if you were out of gas
= too rich as if you had the choke on a hot engine
The engine prefer a fuel rather too rich than too poor.
There are several points that control the fuel and air ratio :
- Pilot circuit: a mini air system pre-emulsified fuel from the pilot jet. The flow of this mixture is calibrated with a screw (accessible from the outside)
- The valve which cut back to manage the transition just after the pilot circuit.
- The needle just after impact to mid-throttle around
- The main circuit last
Look at the color of the candle is not easy because very few lead-free colors and this can give only an idea for full throttle.
The most effective way to test it is to run and see what happen. You do that on a same day in order to overcome the differences due to the weather. You use a smaller jet 5 smaller and 5 bigger to get the better running.
The richness of the pilot jet will be set by screwing and unscrewing the screw alternately to seek the middle position gives the engine speed is higher. If the rpm goes much, you lower the rpm by acting on the rpm screw. If your pilot screw is loose more than 2-1/2 turns you will use a bigger pilot jet and control again the setting.
If your bike is running bad when you open the throttle (after adjusting the low speed), you need to acte on the needle position. The needle upper = more rich. Jump two notches to be sure to go in the right way because it will amplify the symptoms. I remind you that they are clearly identifiable when you have a very bad carb adjustment.
If your bike is malfunctioning from 1/3 of engine speed, full throttle, you will see if the main jet can be optimized. Go to the 5pts in 5 pts, feel free again.
Finally, note that the permeability of the air filter modify the air quantity. Change or grease foam filter therefore influence the qty of fuel required.
Changing the compression ratio has also an influence. An increase will require fuel poorer.
A racing camshaft, mounted without an increase in compression, will require a richer carb.
The change of the exaust does not necessarily require a review of the adjustement. In any case this new exaust may require both a smaller than a larger jet. This will depend on the pressure in the pipe (related to the engine compression pressure).
An increase in cubic don't need to change the carb setting if the compression is the same.
NB the values ​​quoted are for carbs fixed by two screws on the pipe. The Keihin and  Mikuni 24/26/28 can have other large scales with different jet size .

Items in the same category 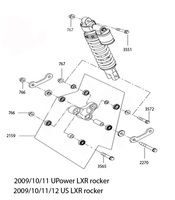 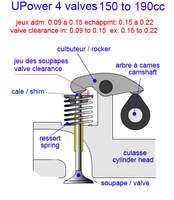 How to set your pit bikes suspension

We use cookies on our site to collect statistics on visits. By clicking on I accept or by continuing on this site you accept the use of these cookies. More infos...
A Question ?